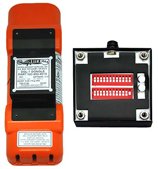 What is the meaning and purpose of the Artex ELT ending in part number -999?

An Artex ELT with a part number ending in -999 simply indicates that the unit is not programmed and is intended to be programmed via dongle (DGL-1) or wired into the ELT NAV interface (455-6500). Mostly only fleet operators and airlines request this programming ability to avoid reprogramming an ELT during routine maintenance should the ELT be replaced.

Most Artex ELT systems are received by distributors programmed with the ELT serial number for use in the USA. Thus the P/N ends in -366. If the ELT is programmed for another country, then the appropriate labels are placed on the ELT. However, the original dataplate part number remains the same. Dealer/distributors who are authorized to program Artex ELTs are not permitted to change the part number of the ELT.

Therefore, if someone requires an Artex ELT to actually have the -999 part number then this must be requested before the distributor places the order with the factory. Otherwise, programmed ELTs can be programmed with a default hex address and ID to be equivalent to the -999 status. When this is done by an authorized programming facility, the dataplate remains the same but the separate label with country and three digit code becomes blank and the hex ID label indicates the default hex ID.

What is the service life for most ELT 406 MHz?

It depends on the make and model of the ELT. However, most 406 ELTs have a battery life of either 4 or 5 years. Most batteries can transmit for as long as 24 hours.

How does the Artex Programming Dongle (DGL-1) function?

Most commonly utilized by fleet operators, the DGL-1 programming dongle allows an ELT to be transferred between aircraft without having to reprogram or re-register. The Artex DGL-1 is mounted on the ELT cover (see picture). The DGL-1 is not a memory device that stores multiple ELT coding formats. Instead, the aircraft 24 bit address is coded into the dongle by setting a series of small dip switches. The switches are accessed by removing 4 screws that attach the dongle to the ELT top cover. Inside the dongle, there are two rows of 12 switches (see picture). These 24 switches are used to set the aircraft's 24 bit address by way of binary 1s and 0s. 1s are electrical ground, 0s are electrically open.

A few other notes regarding the DGL-1: 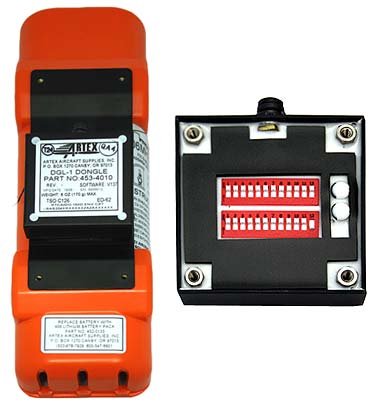